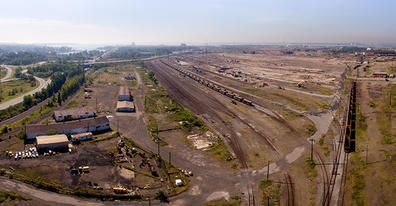 Tradepoint Atlantic, a 3,100-acre multimodal industrial site in Baltimore, Maryland, that features a unique combination of access to deepwater berths, railroads and highways, today announced that Pasha Automotive Services, a subsidiary of The Pasha Group, a global logistics and transportation company, has signed a lease to launch automobile processing operations at Tradepoint Atlantic.

Supported by a new purpose-built auto terminal, modern rail-loading facilities, and direct access to both CSX and Norfolk Southern railroads, Pasha is positioned to help bring significant economic opportunity, including new jobs to the community.

The initial lease will ready 21 acres of improved land to service Tradepoint Atlantic’s first OEM contract, with potential expansion of up to 150 acres.

The terminal will host a roll-on/roll-off (ro-ro) operation for imported automobiles, beginning with Fiat Chrysler. The first vessel call is planned for July of 2016, with Tradepoint Atlantic investing $5 million on infrastructure upgrades such as berth improvements, security upgrades, and additional roadway infrastructure for the site.

“Pasha has long sought the ideal location in the Mid-Atlantic to set up a scalable ro-ro facility, and has operated regionally for many years,” said John Pasha, senior vice president, Pasha Automotive Services. “In our diligence we recognized that Sparrows Point in Baltimore is the ideal location based on rail access to both CSX and Norfolk Southern railways, proximity to the Atlantic, and major highways, and virtually unlimited growth potential. Management possesses the needed expertise and has already demonstrated incredible development capability through their remedial and new construction projects at the facility.”

“Tradepoint Atlantic is excited to welcome Pasha to Sparrows Point as one of the premier providers of automobile logistics,” said Michael Moore, CEO of Tradepoint Atlantic. “This partnership, which carries the opportunity for further expansion, represents a significant step forward in the roll-on/roll-off space for the Port of Baltimore and Tradepoint Atlantic.”

The Port of Baltimore transported 753,265 vehicles in 2015, the most among U.S. ports for the fifth consecutive year.1

“Pasha’s commitment to the auto business at Tradepoint Atlantic provides proof of concept that our property is well-suited to attract and grow international shipments of vehicles,” added Joseph Greco, VP of Commercial & Trade Development at Tradepoint Atlantic. “Pasha has an impressive reputation in the automobile logistics industry and we are proud to have them as our partners.”