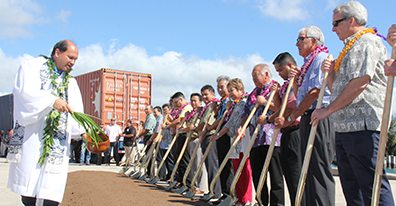 “I’m proud to say the construction of the Kapālama Container Terminal Project is underway, and in four years we’ll have a new state-of-the-art cargo facility that will allow us to consolidate cargo operations, enhance operational efficiencies and improve cargo handling capacity. This will support our local economy while ensuring the continued flow of cargo to our communities through this distribution hub,” said Gov. Ige.

“In addition to the $448 million that we’re investing in the Kapālama Container Terminal project, we’ve completed several other modernization projects designed to enhance maritime operations throughout the state. These projects have infused over $140 million into our local economy, creating job opportunities in construction and specialized trades as well as transportation and maritime related occupations. These accomplishments would not be possible without our private industry partners — including the Hawai‘i Harbors Users Group and The Pasha Group.”

The Kapālama Container Terminal (KCT) is the centerpiece of the Harbor Modernization Plan resulting from the approval of Act 200 (2008) and is necessary to maintain the vital, just-in-time shipping logistics necessary to sustain our island state. More than 80 percent of all goods consumed by Hawai‘i residents and its visitors are imported to the islands, and of that, more than 98.6 percent flows through the Port Hawai‘i commercial harbor system.

The Harbor Modernization Plan initiative has been championed by the Hawai‘i Harbors Users Group (HHUG) and supported by the Legislature since 2008. It identified key improvements designed to expand harbor capacity, address advancements in containerized cargo handling, alleviate congestion issues and the lack of available operational space, and develop more adaptable and resilient port facilities.

“This is truly a wonderful day. The Hawai‘i Harbors Users Group began this journey over a decade ago because we understood that Hawaii’s container terminal operations had reached its maximum capacity and that the inefficiencies were adversely affecting Hawai‘i’s economy,” explained Gary J. North, Executive Director, Hawai‘i Harbors Users Group. “Gov. Ige was a member of the Legislature at the time, and understands the dire consequences facing our state. I would like to thank him for making the Kapālama Container Terminal and all the harbor modernization projects a priority for his administration. His leadership team at the Department of Transportation, especially at the Harbors Division, has been an asset in bringing these projects to reality.”

“The Kapālama Container Terminal project is an investment in Hawai‘i’s future that will pay dividends for generations to come. The partnership we’ve cultivated with Gov. Ige’s administration has given us the confidence to invest in the most technologically advanced and environmentally friendly vessels. They will serve the Hawai‘i/Mainland trade lane, and construct infrastructure improvements unique to our Honolulu operation, including facilities and container gantry cranes,” added George Pasha, IV, President and CEO, The Pasha Group. “We look forward to the completion of this new terminal and our continued partnership and service to Hawai‘i’s communities.”