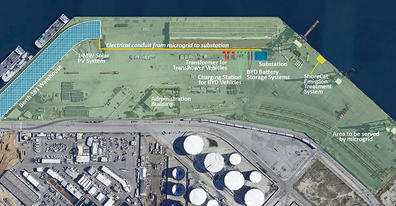 Pasha Stevedoring and Terminals is transforming its multi-use terminal at the Port of Los Angeles into a testbed for near-zero emission and renewable energy technologies that are designed to make port operations more sustainable.
Some of the technologies, such as battery-powered forklifts and yard tractors, are used to move cargo at various container ports around the United States. A unique aspect of the Pasha demonstration project is that it integrates several types of clean equipment in a breakbulk terminal, which typically handles a variety of non-uniform, heavy loads such as steel, containers and machinery, and has different operating requirements than a container terminal.
“We’re going to be the proving ground to change the paradigm of how large industrial facilities can run on clean energy. We’re confident we can show this is absolutely attainable,” Jeffrey Burgin, senior vice president of Pasha, said in a statement issued by the port authority.
In a phone interview, he said that part of the motivation is to speed up technology development before local, state or federal governments hand down environmental mandates that can crimp business flexibility.
Sustainability is increasing in importance as a strategic goal for commercial ports because they have a significant impact on local communities in terms of harmful fossil-fuel emissions and traffic congestion resulting from vessels, cargo-handling equipment, trucks and trains that move ocean freight. Residents and community activists fight to limit expansion of industrial complexes in their backyard when pollution becomes a healthcare issue. That is what happened in Southern California in the early 2000s. Important infrastructure projects were put on hold for several years until the ports of Los Angeles and Long Beach developed clean-air action plans to reduce particulate matter, sulfur oxide and nitrogen oxide.
The 40-acre Pasha terminal is adjacent to Wilmington, a neighborhood identified by California regulators as disproportionately impacted by pollution from the port complex.
The project’s goals are to integrate zero-emission vehicles and cargo-handling equipment in regular terminal operations, reduce emissions at berth from ships not regulated under California law, accelerate the development of commercially viable zero- and near-zero emission equipment and create an in-house energy source to reduce reliance on the electric grid.
A major piece of the project is a micro-grid, featuring a 1 megawatt rooftop solar array, battery storage, and bi-directional charging equipment that can receive as well as supply power, and an energy management system that balances power needs with capacity, so portions of the terminal can operate independently for a period of time in the event of a power loss.
The small-scale power network is primarily designed as a backup system to increase the terminal’s resiliency. If a storm or other disaster cuts off power, a circuit breaker will separate the micro-grid from the main grid, making the micro-grid an island of power.
“The whole vision of the Pasha Terminal is to be self-reliant in case the grid goes down,” Carter Atkins, an environmental specialist with the Port of Los Angeles, explained.
Burgin told American Shipper the original vision for the project was to have a facility that could be used by first responders and the U.S. military as a base of operations to deliver food aid, healthcare and other emergency services to the region if there were a catastrophic event.
The energy control system will allow the battery to charge up on solar during the day and charge from the grid, if necessary, at night.
Atkins said the micro-grid, which is being installed by the engineering firm Burns & McDonnell, could also be used to reduce utility costs by shaving use of the grid during peak hours when rates are high.
The micro-grid will be scalable, with future phases expected to include some form of back-up power generation from a clean energy source or fuel cell, he said. Planners eventually hope to produce the world’s first marine terminal able to generate all of its energy needs from renewable sources.
Other ports are also exploring micro-grids to offset a baseline portion of terminals’ power needs and increase operational reliability. Micro-grids are appealing because they offer better energy management, high quality power and resiliency, Clay Sandidge, president of Muni-Fed Energy, said in the Summer 2014 issue of the American Association of Port Authorities’ Seaports magazine.
For moving cargo, Pasha will purchase four battery-electric yard tractors for moving containers or other cargo on trailers, and repower two heavy-lift forklifts, two drayage trucks for making local deliveries and a top handler. The repowering, which will be done by a company called Transpower, involves replacing diesel engine components with electric motors and batteries.
The modified cargo-handling equipment, which represents about 10 percent of the terminal’s entire fleet, will be subject to the same rigorous duty cycles of conventional equipment, officials said.
Another source of port pollution is vessels at berth.
Ships typically run auxiliary engines with some form of marine fuel to power heating, cooling, refrigeration, electric, computer and other onboard systems. To address respiratory health concerns in port communities, the California legislature passed a law requiring container and refrigerated cargo vessels, as well as cruise ships, to reduce at-berth emissions in 2014 by turning off auxiliary engines and connecting to another power source, or using alternative technology that reduces emissions by an equivalent amount. Under the statute, half the vessels in those categories, and half of each company’s fleet, must hook up to electric power. The vessel threshold rises to 70 percent in 2017 and 80 percent in 2020.
California ports invested hundreds of millions of dollars to build electric infrastructure on the docks so ships can plug into shore power. Vessel operators have also had to invest in vessel retrofits and build new ships with shore power capabilities.
But the rules currently don’t apply to bulk, breakbulk, and roll-on/roll-off vessels. Meanwhile, owners of containerships are only retrofitting vessels that regularly call at West Coast ports because there is no economic benefit to do so for those that get routed there on an infrequent basis.