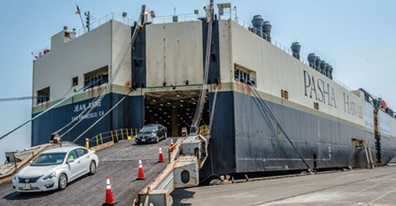 Why did several buses in San Francisco have “Honolulu” flashing on their destination signs yesterday?

They were part of the cargo being loaded onboard the first ship to call Pier 80 at the port since Pasha Automotive Services was awarded a 15-year lease to operate the 69-acre terminal by the Port of San Francisco in May.

The contract “will bring maritime activity back to this port as originally intended,” said Elaine Forbes, the interim director of the Port of San Francisco. The Pier had been used by the city as a homeless shelter.

John Pasha, senior vice president of Pasha Automotive Services, said the company hopes to eventually attract as many as 96 ships a year and handle as many as 150,000 automobiles annually.

Pasha noted that U.S. auto sales hit a record high of 17.5 million in 2015 and are expected to increase.

While automobiles are also handled at other ports around San Francisco Bay, such as Richmond and Benicia, Pasha said the terminal will provide yet another way for automobile manufacturers to import cars to customers in the northern part of California without having to truck them north from ports in the southern part of the state such as San Diego and Port Hueneme.

Pasha also believes there will be opportunities to handle automobiles being exported from Mexico, where automobile manufacturing is booming.

While Pasha is still negotiating deals with manufacturers to bring cargo to Pier 80, sister company Pasha Hawaii had Jean Anne, a roll-on/roll-off ship that normally operates between San Diego and Hawaii, call the terminal yesterday.

John Pasha explained that the opportunity arose, in part, because it has been carrying several yachts back to the San Francisco Bay area that have recently competed in the Pacific Cup race between San Francisco and Oahu.

The opening of the facility is a return to the San Francisco waterfront for the Pasha Group. In the 1960's, it had handled Toyota imports at Fort Mason in the city.

“Not only are we returning to our roots in San Francisco, but we are transforming this underutilized pier to a facility requiring a maritime use to serve customers and create local jobs," he said. "As a company, we are committed to ensuring that maritime uses are supported, and that our country’s valuable waterfront assets receive the investment they need to serve commercial, not just recreational uses."

The terminal is expected to employ about 50 longshoremen who will load and unload the ships calling at the terminal and another 150 workers who will process, upgrade and accessorize cars.

Pasha has entered into an agreement with CityBuild, an employment program under the San Francisco's Office of Economic and Workforce Development, that will train residents for processing work at Pier 80. Priority will be given to hiring residents who live near the terminal.