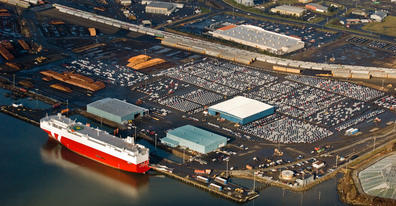 The U.S. auto industry was among the hardest hit sectors of the economy during the recession. But since then, all the big carmakers are doing well and business is rolling, including imports and exports.

The car industry’s annual U.S. sales have nearly doubled from their low, and at 15.5 million are back to the level they were at before the start of the recession. Analysts predict more sales gains in the year ahead.

This is good news for roll-on roll-off (ro-ro) terminal operators such as Pasha Automotive Services (PAS), which also handle large equipment such as trucks and agricultural equipment.

In fact, in July PAS secured a new three-year contract for the receiving, processing and distribution of Fiat vehicles at the Port of San Diego.

PAS operates the 135-acre National City Marine Terminal at the Port of San Diego. Since the opening of its terminal in San Diego in 1990, the company has experience continuous expansion at the port and now operate on 157 acres of land, with over eight acres of covered buildings. Up to four vessels can be loaded and discharged simultaneously. The facility has ready access to the interstate highway system and is served with on-dock rail by a major Class 1 railroad.

“As an operator of four domestic Ro/Ro combination terminals [Baltimore, Grays Harbor, Huntington Beach, and San Diego], we believe the market for these terminals is strong, rebounding from the most recent recession of 2007- 2008,” reports John H. Pasha, senior vice president of Pasha Automotive Services.

Furthermore, PAS’s approach is for value added, full service for these terminals on dock.

For example, he points out, most vessel operators are shifting from PCC (Pure Car Carriers) to PCTC (Pure Car Truck Carriers), which allows for a broader range of cargoes to include agricultural equipment, buses, oversized equipment on trailers, etc. In Pasha’s view, this allows for more opportunities to compress the supply chain and reduce costs and improve cargo velocity for all transportation partners.

Increased production in Mexico is also having a positive impact on PAS’s business. “As our cargoes are primarily finished vehicles, the increased Mexico production of automobiles is creating more opportunities to ship by short sea, as has been done in Europe for decades,” he says.

Finally, the increase of exported finished vehicles from North America to other countries offers increased volumes and traffic for current and future ro-ro ports, e.g. 30,000 to 100,000 units in three years at the Pasha Automotive Terminal at the Port of Grays Harbor, WA, Pasha indicates.

Positioning a facility is critical to the business. The first thing that needs to be done is identifying viable U.S. geographic regions and shipper supply chain requirements. After that, PAS looks at how they might optimize capacity and improve the supply chain.

“Step 1 is finding a port interested in development of ro-ro cargoes and a vision for a long-term partnership in development,” states Pasha. “An excellent example is our partnership with the Port of Grays Harbor in Washington and one of our major customers, Chrysler.”

A plus to the Grays Harbor ro-ro terminal, which opened in January 2009, is the fact it is equidistant between the population centers of Seattle and Portland. According to a PAS slick sheet, Terminal 4 – the port’s main general cargo terminal, features over 100,000 square feet of clear span warehouse, 84 dedicated and over 120 multi-level railcar spots on terminal and 80 acres expandable to 140 contiguous. It also provides over 37,000 feet of new Class 1 standard rail on dock with multiple loop tracks connected via the Puget Sound & Pacific Railroad to the Union Pacific and Burlington Northern Railroads.

Grays Harbor exported over 70,000 Chrysler vehicles in 2012 and is anticipating over 80,000 in 2013. Case New Holland, Caterpillar, and Transnet export a wide variety of construction and agricultural equipment with Chrysler via Siem Car Carriers North America Pacific service connecting the West Coast to the Asia Pacific markets.

A major plus to the Grays Harbor site, says Pasha, is it offers the ability to grow from 40 to 150 acres for the long- term growth, and closer proximity to the open ocean for vessel operators versus other Pacific Northwest ports. This avoids costly river and sound transit and allows savings and efficiencies for steamship lines.

“The site also has major rail infrastructure to allow the movement of unit trains of automobiles, again offering efficiency in the Supply Chain. The result: savings and efficiency for our mutual customer,” notes Stan Gabara, Pasha executive vice president.

In September, PAS and the Port of Grays Harbor completed a two-year project that involved capital investments by the port, Pasha and transportation partners in paving, rail and processing facilities. The combined investments and renovations of terminal processing capabilities resulted in over 60 paved acres surrounded by new security systems, a state of the art Belanger custom carwash system, drive over undercoating application pits, homologation and accessory bays and a new body/mechanical center. Still underway is an additional 10-acre paving/lighting project.

A plus to the site is full terminal capacity can be expanded to approximately 150 acres.

As a result of the new infrastructure, business now includes an import client on short-sea service from Mexico. Rental car reconditioning for rental cars destined for auction is also booming with several thousand units passing through the port annually.

According to Pasha, development at Grays Harbor is driving at a fierce pace. “We now have a perfect entrée for Mexico short sea and landbridge imports, as well as a unique platform to expedite ro-ro exports and imports through the Pacific Northwest,” he says.

As for PAS’s future ro-ro terminal growth, executives point to Short Sea from Mexico, export of North American vehicles and Over High and Wide cargoes to the markets of Asia, Central and South America.

“Our most recent development is the signing of a memorandum of understand (MOU) with Port Manatee in Florida, which has the elements previously discussed, along with a strong interest and commitment for the development of a major import/export ro/ro terminal to serve Mexico, Central and South America, Caribbean, and potentially Cuba, as it becomes a broader international trading partner,” reveals Pasha.

The Port of Manatee has two newly expanded berths, new paving and land infrastructure, scalable acreage to be developed, excellent rail infrastructure with Class 1 railroad (CSX), large modern processing buildings and strong desire to partner with its customers and tenants.

“They have the `Package’ we look for that has been successful for us at the Port of San Diego, where we handle nearly 400,000 vehicles annually along with our Hawaii Liner service, and our Port of Grays Harbor terminal,” Pasha says. “All our agreements include the full service approach, including value added on terminal allowing us to create career jobs, broad quality service and flexibility to our customers and transportation partners.”