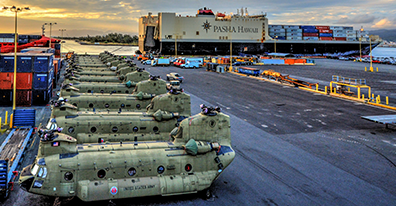 Honolulu, HI-based Pasha Hawaii announced that it’s redelivering a dozen twin-bladed CH-47 Chinook helicopters from Pier 1 in Honolulu Harbor to the Mainland via the M/V Marjorie C on behalf of the Hawaii Army National Guard.

The helicopters had arrived via Pasha Hawaii’s M/V Jean Anne at Pearl Harbor Naval Shipyard from the National City Marine Terminal at the Port of San Diego in 2013, and will now be returning to National City for offloading and reassembly before heading to Fort Hood, TX.

“We are honored to serve our military and provide them with the utmost care in managing the return of these helicopters,” said George Pasha, IV, President and CEO. “It is also a pleasure for our civilian team to work hand in hand with our military partners on the planning and logistics of this complex move.”