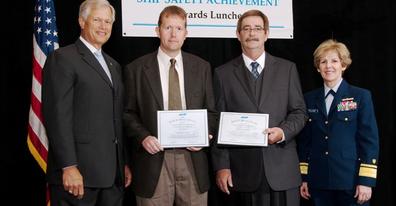 Pasha Hawaii has received recognition from the US Coast Guard (USCG) and the Chamber of Shipping of America (CSA) for its record of safety. The CSA presented Pasha Hawaii with the 2009 Jones F. Devlin Award at the chamber’s recent Annual Ship Safety Awards luncheon, which recognizes the women and men responsible for safe ship operations.

At the event held in early June, Pasha Hawaii received the Jones F. Devlin Award for safety presented by the CSA for vessels with consecutive years without incident.

Self-propelled merchant vessels that have operated for two full years or more without a seafarer involved in a lost-time injury are eligible for the Jones F. Devlin Award. Three levels of achievement are recognized: a basic two-year award, a three-year award, and a four-year award. The Jean Annehas achieved the three-year level.

On hand to receive the Devlin Award, and representing Pasha Hawaii, were Captain Greg Johnson, Master of the M/V Jean Anne, and Chief Engineer Mats Holmquist.

George Pasha, IV, Chief Executive Officer of Pasha Hawaii, comments, "We are particularly proud of our safety record, especially since taking over the technical operations in January 2009. The key to our success is continuity of leadership, which is made possible by the concerted efforts of Ulrich Pienka, who, as Technical Director, is responsible for the day-to-day running of our ship, our two Captains, Greg Johnson and Steve Bond, and our very able crew."

Joseph Cox, CSA president, said: "We have been holding these annual award ceremonies since 1950. For that initial year, we honored six vessels having a total of 12 years operation with no lost-time incidents. This year, we gave awards to 1,094 vessels that operated 7,108 years without a lost-time incident. This extraordinary record is directly attributable to the professionalism of our seafarers and the dedication of shore-based company personnel to safe operation."

CSA represents 33 US-based companies that own, operate or charter oceangoing tankers, container ships, and other merchant vessels engaged in both the domestic and international trades and other entities that maintain a commercial interest in the operation of such oceangoing vessels.