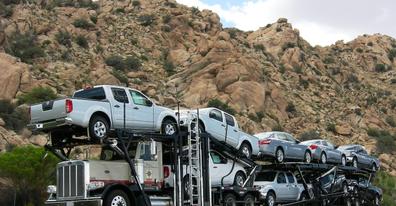 The Port's Clean Truck Program provided Pasha with funding for replacing the older trucks. The program also provides funding to retrofit trucks with a special diesel particulate filter that reduces emissions. The trucks must be used for business on Port tidelands.

First approved by the Board of Port Commissioners in June 2008, the program was initiated after Proposition 1B funding was made available through the state's Goods Movement Emissions Reduction Program. The California Air Resources Board is the state agency implementing the program and the San Diego County Air Pollution Control District is the local agency responsible for administering the funds.

Pasha Distribution Services LLC, a business affiliated with Pasha Automotive Services, submitted applications to replace seven of its model year 1991 trucks. The trucks are used to transport cars to and from the National City Marine Terminal to customers throughout California.

Due to specialized trailers that are attached to the trucks, the electric hydraulic system and the amount of time needed for assembly, prices for the new trucks averaged about $250,000 each.

"We're pleased to be a participant in this program," said John Pasha, Vice President of Pasha Automotive. "The new trucks use state-of-the-art electric hydraulics, so there's no need to idle, which ultimately improves the air quality."

The California Air Resources Board awarded Pasha $50,000 per replacement truck and the Port of San Diego agreed to match that funding. Unfortunately, the state money has been frozen because of the financial crisis, and the state has been unable to meet its funding agreement. Nonetheless, the Port of San Diego agreed to fund its portion of the matching funds, which totalled $350,000 and Pasha agreed to pay all remaining costs.

"Pasha Automotive Services really stepped up to the plate to get its older trucks off the roads," said Commissioner Scott Peters, who chairs the Port's Environmental Advisory Committee. "This program is still voluntary and by replacing these trucks, despite the frozen grant funds, Pasha demonstrated its commitment to improving the air quality around the tidelands."

In April 2009, the Board of Port Commissioners approved a resolution allowing the Port to continue to provide funds for truck retrofits and new trucks without the matching funds from the state. By doing this, it allows the Clean Truck Program to continue. Under the amended program, truck owners must pay for the truck replacement costs that would have been covered by the state. Pasha is the first applicant to have been able to take advantage of this.

Six applicants have requested money to replace 19 trucks, with one to be retrofitted. The Air Pollution Control District is reviewing these applications and if approved, the Port would pay up to $50,000 for each replacement and $5,000 for each retrofit. The remainder would be the responsibility of the truck owner. The Port is monitoring the state budget developments and anticipates that state grant funding will soon be restored.