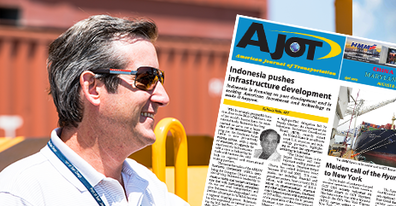 John Pasha is clearly driven to succeed and help others, whether in his role as senior vice president of Pasha Automotive Services – the vehicle processing and distribution solutions unit of The Pasha Group – or leading San Diego civic efforts or playing guitar in a rock ’n’ roll band.

A third-generation member of the family enterprise, he carries on a tradition established by his father and grandfather, with current ventures including in a new auto terminal and related facilities at the Port of Baltimore’s Sparrows Point.

He offers his thoughts on the Baltimore undertaking, the importance of sustainability, his worldly upbringing and his extracurricular pursuits in an interview with the American Journal of Transportation.

How is Pasha expanding in Baltimore, and what is most significant about this endeavor?
We have been in Baltimore for some time, with different-sized parcels in Dundalk and off-port terminal sites, but we’ve been looking at the mid-Atlantic for many years for a long-term presence to build scale. We actually looked at Sparrows Point seven or eight years ago.

About a year ago, they had a player really able to do something interesting with the site and bring it to a state where we were able to operate on it. It’s the old Bethlehem Steel site – 3,100 acres – which is really unusual, for such a large piece of industrial land to become available on the Atlantic Coast.

So we engaged with Tradepoint Atlantic [TPA] to operate on that space and are already building out. We’ve got 21 acres paved in partnership with TPA and should have our first vessel here by the end of August.

There’s been a lot of interest frankly from a lot of OEMs [original equipment manufacturers aka automakers] to bring new business into the region and expand business that’s in Baltimore already but been limited due to capacity in the neighboring area.

One thing that’s pretty unique about that site is you have both Norfolk Southern and CSX [rail] lines coming into the facility through a short line, giving OEMs both options in the same location, competitively offering more service to more locations.

We see that as a great opportunity for both import and export for autos and over-high-and-wide and other rolling stock, with virtually unlimited capacity.

Why is it important for the industry to make sustainability advances, such as those that Pasha is currently undertaking from Maryland to California?
Aside from obvious environmental benefits, it’s self-serving in terms of what you’re able to do on a footprint.

On the West Coast, where we’re severely constrained in terms of terminal capacity, we’re finding that sustainable practices allow you to basically run more product through a smaller footprint, so it has a double-win of higher throughput while reducing emissions.

In Baltimore, we have the opportunity, because it is a new greenfield site, to build the entire operating facility with LEED [U.S. Green Building Council Leadership in Energy and Environmental Design] principles and take advantage of some of the technology out there that will not only be efficient but reduce our energy consumption and costs.

How have your work experiences in Europe and South America provided perspectives that advance Pasha and its service to customers?
My European experience was probably the biggest eye-opener. We had a partnership with Galliker Logistics in Switzerland. It is a family-run company, but it is by far one of the most sophisticated, innovative companies on the planet and run like a Swiss watch. Their purpose-built facilities and investment in automation allow Galliker to competitively provide best-in-class service.

We in the United States have frankly been a bit challenged in the processing industry, where we’ve not had the luxury of capital expenditures. A lot of the [U.S.] facilities have been former military port locations or different industrial-use sites converted into auto processing.

Where we have a greenfield operation, like Baltimore, we can introduce technology that is cutting edge.

In Europe, in places like Rotterdam [Netherlands] and Zeebrugge [Belgium] and Bremerhaven [Germany] and some of the more mature ports, automation and even auto-stacking is common, with car decks. We don’t need that in Baltimore, because we’ve got a lot of space.

There’s a lot of innovative technology in the physical operations, like use of RFID [radio frequency identification], so we are liaising with a number of European companies, including IT [information technology] companies, to introduce both physical and software solutions that will be leading in the industry.

As the company was founded by your grandfather, George W. Pasha Jr., in 1947, what pressures and pleasures are involved in carrying on a family tradition of excellence?
We love the business. I think that’s a unique thing about our company, that the family is very close. We still travel together and enjoy a lot of time with our mother and siblings and 15 grandkids.

I’d say that’s one of the pleasures is being able to expand the company and provide an ongoing business that can allow for opportunities for our next generation.

My two older kids are already working summers in the business in San Diego, learning how to paint cars and drive forklifts and do various things. I think that’s exciting, to have a family business which creates the opportunity for all of us to enjoy the business my grandfather started many, many years ago.

What car do you drive yourself and why?
I drive a 6 Series BMW. It’s a 2004, but, since we have body and paint shops, it looks pretty new. I have not changed that car out because it’s a six-speed manual and just a lot of fun to drive.

I restore cars as a bit of a hobby, so we have some other cars we enjoy driving on the weekend, including a ’71 Fiat 500 and an old ’66 Alfa Romeo Duetto that was my sister’s car that we just finished restoring.

Who has most influenced your life, both professionally and personally?
For sure, my father [George W. Pasha III, longtime chief executive officer and chairman of The Pasha Group, who died in 2014 at 79]. He went to St. Ignatius [College Preparatory school] in San Francisco; I followed his footsteps there. In high school, he was already buying and selling cars amongst his circle of friends. He was an entrepreneur from the get-go.

His father, our grandfather, owned and operated a couple of gas stations in San Francisco many, many, many years ago, before incorporating our business.

But he [my father] started in high school and drove a truck when he was about 18 and later graduated college [with a transportation degree from the University of San Francisco] and really took the reins and brought the company to a totally new level because he just had that entrepreneurial spirit and drive.

He was amazing to watch. He was a great father figure. He was a good role model and shared the business with our family.

He brought guys from Japan into our house who made homemade sushi in our kitchen before sushi was even popular in the United States.

We had kids of company colleagues of my father who would stay with us who were from Germany and Asia who we got to interact with when we were children, so he made the world a very small place for us in terms of seeing all the different cultures and all the different opportunities to interact on a global scale.

All of our family has continued in that tradition, to travel and make business partners in a unique way, because of my father and my grandfather.

How are you involved in the San Diego community?
Currently, I’m on the board of directors for the YMCA of San Diego County. We’re fundraising a big capital campaign for a new facility in the South Bay, in Chula Vista, which is really a neat project. It’s a high-impact zone in an area that’s really poor, about 45 percent under the poverty level.

I’m also currently co-chair of the Working Waterfront Group in San Diego. It’s a very interesting coalition of waterfront industries, environmental folks, the Navy, organized port labor and so on.

Our mission is to preserve and grow maritime industrial opportunities on the tidelands of California, which, unfortunately, is continuing to shrink, with gentrification and baseball and football stadiums and all kinds of different development pressure from the commercial side of the world taking over what are really important – deepwater port properties.

There just isn’t a lot left, and there won’t ever be more created. We’re out there trying to preserve that and look out for high-paying jobs and places to continue running commerce through the United States.

Aside from work and everything else you’ve mentioned, how do you most enjoy spending your time?
I’ve got four kids and a beautiful wife, so family time is always pretty busy. It’s always a party in our house.

I’m also a guitarist in a band with some neighbors and other friends. It’s a rock-alternative band called Sundays at Midnight, and we like to play gigs in San Diego. You’ll find us at the Blackthorn Irish Pub, and, earlier this year, we did a fundraiser for a local kid named Malik who is fighting osteosarcoma.