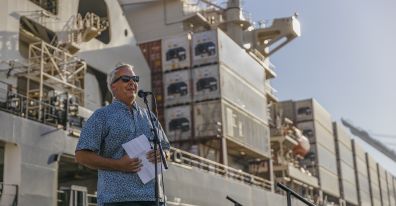 Earlier this year, the Port of Long Beach became the first West Coast seaport with the ability to refuel ships powered by liquified natural gas (LNG). And this week, the first LNG-powered container ship to refuel on the West Coast called at the nation’s second busiest port, marking a major milestone toward greener operations.

Pasha Hawaii’s new ‘Ohana Class container ship, dubbed George III, arrived in Long Beach on Wednesday at the SSA Marine terminal on Pier A for refueling and was christened by the Pasha family Thursday, with port officials, mariners and union leaders in attendance. The ship became the first LNG-powered vessel to refuel on the West Coast on Aug. 17.

“This would be a very proud day for my dad,” President and CEO George Pasha IV said, fighting back tears during the ceremony for the ship named after his father.

The Long Beach call marked the completion of the 774-foot-long vessel’s maiden voyage. The ship travels a 14-day loop from Honolulu to Oakland to Long Beach and back to the island state.

Pasha is crucial for the island state’s connection to the mainland, second only to Matson in terms of the volume of goods carried to Hawaii. About 70% of goods carried by Pasha come from Long Beach, according to Edward Washburn, senior vice president of fleet operations.

The new LNG ship has a capacity of 5,000 20-foot-equivalent units (the standard measure of a shipping container) and was designed from the ground up to be as efficient as possible, Washburn said.

When most new U.S. cargo ships are built, companies choose from an “off-the-shelf” design, Washburn explained. The hull for the George III, however, was designed specifically for Pasha’s use, which resulted in a wider and shorter ship optimized for efficiency. The ship’s rudder and propeller were developed at the Maritime Research Institute in the Netherlands.

“It’s safe to say this is the most hydrodynamically efficient container ship in the world,” Washburn said.

Pasha has a total of seven ships, including the George III. One ship is in reserve, while another, the Horizon Reliance, is currently being retrofitted to operate using LNG and is expected to re-enter service later this year. With five ships in continuous operation, Pasha has a vessel in Long Beach five days a week, Washburn said.

The company plans to convert another one of its ships to LNG, but some of its current fleet are not compatible for the conversion due to their age, Washburn said. Pasha has another brand new LNG ship—the Janet Marie, named for George IV’s mother—slated for delivery in December, he added.

In 2016, Washburn said the late George Pasha III challenged him and the team to construct a cleaner ship. In August 2017, Pasha signed a contract with a shipyard for the vessel’s construction. Construction began in fall 2018.

The ship cost $214,799,826 to construct, Washburn said. With the prices of materials having skyrocketed amid the pandemic, he said it would cost about $300 million to replicate today. The total cost to Pasha was $225 million, which includes spare parts, delivery costs and more.

But for the sake of being environmental stewards, the company was happy to pay it.

“Other carriers will certainly look at this as an example of what can be done and how they can help their communities environmentally,” Washburn said. “It’s good for everybody.”

George III surpasses the International Maritime Organization’s 2030 emission standards for ocean vessels, according to the port. It also aligns with the port’s goals of environmental sustainability outlined in its Clean Air Action Plan that targets all zero-emissions cargo-handling equipment by 2030 and all zero-emission drayage trucks by 2035.

Despite the ship’s cleaner footprint, environmental groups say it is not enough, demanding zero emissions instead.

“LNG is not a clean fuel—it is a fossil fuel that contributes to air pollution and climate warming,” Allyson Brown of Pacific Environment said in an email. “We’re already enduring climate change impacts around the globe, including the deadly wildfires, heatwaves and drought we face here in California.”

“We are out of time for transition solutions,” Browne added. “We need zero-emission solutions, and we need to start scaling them for use now.”

Port officials and shippers, for their part, say the technology for zero-emission container ships is not yet ready to serve the world market. Diesel-powered ships can carry anywhere from a few thousand to over 24,000 TEUs.

“The technology is not scalable to the market at this point,” Port of Long Beach Deputy Director Noel Hacegaba said, adding that LNG is a positive stepping stone toward zero-emissions. “There is a lot of momentum to get us there.”

The world’s first electric autonomous cargo ship successfully completed its maiden voyage in Norway earlier this year. While this is a major achievement for the industry, it would take more than 62 of the Norwegian vessels to replace a single large diesel ship.

The electric ship’s deadweight (its total weight capacity, including everything from cargo to crew to food) is 3,200 tons. The deadweight of large container ships, meanwhile, can surpass 200,000 tons.

Alabama-based startup Fleetzero is working toward electric cargo ships with the capacity to carry 3,000 to 4,000 TEUs.

“But there is nothing that is commercially viable that can create this horsepower,” Washburn said, comparing the electric ships to George III. “We’re excited about trying anything but this is the most efficient you can get for maritime fuel for high horsepower.”