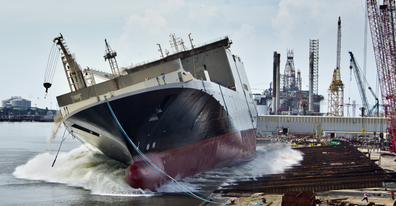 The morning began with a high level of anticipation as workers carefully removed multiple blocks holding the ship in place onshore. As the final block was removed, Marjorie C sped down the tilt beams and glided sideways into the waters of Bayou Casotte, steadying herself in seconds. See videos.

“Launching Marjorie C is a huge and exciting milestone for us,” said George Pasha, IV, Pasha Hawaii President and CEO. “We’re thankful for the many hardworking people involved in her creation, and, while we’re quite eager to get her into service, our immediate focus will be on testing and commissioning her systems.”

The M/V Marjorie C is set to enter the Mainland/Hawaii trade lane later this year. The new combination container/roll-on/roll-off (“ConRo”) vessel will sail opposite the M/V Jean Anne and enable Pasha Hawaii to bring weekly service to Hawaii.