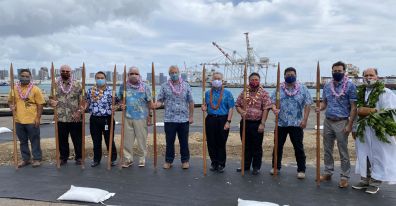 HONOLULU – The Hawaii Department of Transportation (HDOT) dedicated the Kapalama Container Terminal (KCT) Phase 1 and broke ground on Phase 2 of the project designed to improve cargo handling capabilities at the hub of Hawaii’s commercial harbor system in a small ceremony Monday, March 1, 2021.

KCT Phases 1 & 2 are the centerpiece of the Harbor Modernization Program, which developed capital improvement projects to meet the needs of the shipping industry in partnership with HDOT, the Hawaii State Legislature, and the Hawaii Harbor Users Group (HHUG). KCT Phase 1 was completed on schedule and as budgeted with a cost of $174 million.

“The need for expansion and investment in Honolulu Harbor has been recognized for decades,” said Governor David Ige. “Without vibrant, efficient harbors we would have a hard time enjoying life in Hawaii as we know it. I was a senator when the basic modernization plan was approved, and I’m proud that when fully completed in 2024, this approximately half billion-dollar project will increase cargo capacity by 40-percent and ensures our communities can be served in a more efficient way.”

Phase 2 was awarded in late 2020 for $352.5 million and will feature an 18.5-acre container yard, 1863 linear feet of additional berthing capacity, dredging of the waterfront and harbor channel, widening of Piers 40 and 41 for wider inter-island vessels, reconstruction of Pier 41, and structural improvements to Pier 40 to support roll-on/roll-off cargo operations.

“The land and waterside improvements to Honolulu Harbor realized in the two phases of the Kapalama Container Terminal project will benefit harbor users and our friends and neighbors for years to come,” said Director Jade Butay, Hawaii Department of Transportation.

“The KCT pier, designed at 9.81-feet, addresses sea level rise where we anticipate water level heights of 3.6 feet by 2060. Phase 2’s pier design also anticipates less maintenance over the useful life of the pier structure compared to existing pier designs. These improvements have been built to last and we’re excited to continue this modernization.”

Harbor Modernization Program Background
The Harbor Modernization Program is a comprehensive plan to revitalize and upgrade Hawaii’s commercial harbor facilities as a means of effectively managing and operating a statewide commercial harbors system that facilitates the efficient movement of people and goods to, from and between the Hawaiian Islands. The efficient operations at Hawaii’s port harbors are extremely important to the state’s economy, especially when one considers that 80-percent of all goods consumed in Hawaii are imported and that nearly 99-percent of those goods pass through Hawaii’s commercial harbors.

This modernization spans decades and was possible due to the efforts of several administrations. The State acquired the former Kapalama Military Reservation in in 1993 and the vision for KCT was articulated in the Honolulu Harbor 2020 Master Plan published in 1997. Plans for financing for the Harbor Modernization Program were developed over numerous years and the Final Environmental Impact Statement was accepted in October 2014 clearing the way to obtain permits for construction. Finally, under Governor David Ige, construction of Phase 1 began in 2018 and was completed in 2020; completion of Phase 2 is scheduled for early 2024.