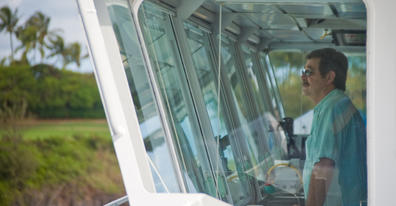 Captain Greg Johnson says that even though the electronic navigation system on the M/V Jean Anne is excellent, "you still need to match what you see outside the window with what you see on the screen. The system is so good, it's easy to become over-reliant, to get focused on the screen ." Photo by Ray Broussard courtesy of Pasha Hawaii.

Captain Greg Johnson, the master of Pasha Hawaii's Jean Anne has a few things to say about ECDIS and electronic navigation.

Captain Johnson knows of what he speaks. The Jean Anne has been equipped with a paperless primary ECDIS navigation system since its 2005 launch, and met IMO/SOLAS requirements with paper charts as a back-up.

"We went fully ECDIS compliant last May, with dual electronic systems" said Captain Johnson. "We still have paper charts on board, but I think the electronic charts are much better."

From the day it launched in 2005, Pasha Hawaii's M/V Jean Anne has led the West Coast commercial fleet in embracing innovation and technology. The 14,330-ton, 579-by-102-foot ship was the company's first pure car/truck carrier constructed to meet the requirements of the Jones Act.

"The paperless navigation practices on the Jean Anne will apply to SOLAS-compliant newbuild deliveries in 2014," said Christian Hempstead, of Hempstead Maritime Training.

Captain Johnson may be all for paperless charts and the electronic bridge, but he is not quite ready to leave the old ways totally behind. He said the Jean Anne carries a set of paper charts as a worst-case backup.

"Training in the use of the sextant and plotting on paper charts is important," he said. "It's good practice to manually plot and target, then look at the situation. You have better understanding of how the ship interacts with its environment."

Proper training is the key to successful implementation of a paperless electronic navigation system, according to Captain Johnson.

"You very much need type specific training," he said. "I went to a one week AMO ECDIS course. It was on a TRANSAS system."

Pasha has installed Sperry on the Jean Anne – so he trained on that as well. The two systems do the same things, but in different ways.

"It's like the difference between a PC and a Mac. You really need training on the system you will be working with."

One of the main differences brought about by an integrated bridge system, in Captain Johnson's view, is track steering, which combines an ECDIS with the autopilot. The navigator can program a voyage plan into the ECDIS that contains one or more tracks

"Track steering is a step up from autopilot," said Captain Johnson. "We input the voyage information and parameters, along with maximum rudder and whether it can deviate 50 or 100 meters off course.

"We are not making course corrections – we just make sure the machine is following the line. At waypoints, it gives an alarm then makes the turn unless you tell it not to."

The autopilot system receives its orders from the ECDIS and transmits steering commands to the steering system. Those orders may include manual changes of wanted heading, turn radius or rate of turn. The orders may originate from track control along a selected route..

The software that controls the whole system is Sperry Marine's proprietary Voyage Management System software, which integrates inputs from the ship's navigation sensors to present a clear, real-time picture of the ship's position and movement across the ECDIS.

Before the 2013 upgrade, the Jean Anne's charts were updated with commercial e-charts.

"When we went fully compliant, we started using NOAA e-charts," said Captain Johnson. "You can have the best system in the world, but if the charts are not upgraded you don't get the full advantage of your technology." The Jean Anne's charts are updated using onboard wi-fi when the ship is in port in Honolulu and San Diego.

Increased safety is another reason Captain Johnson likes the increasing role of integrating electronics in navigation.

"The biggest thing to increase safety is AIS," he said. "The AIS is integrated into the radar and the ECDIS. You can actually see a ship's name on the radar screen as well as the electronic chart, so you know who you are talking to."

Even though the Jean Anne's bridge system is automated and intelligent, Captain Johnson recognizes that system failures can occur, such as the possibility of GPS failure or spoofing.

"If the spoof is mid-ocean, it would be hard to tell unless you noticed the swell coming from a different direction," he said. "We check the magnetic compass against the gyro header every hour and log the readings. We would notice a differential in the track line."

There is one slight change in the integrated bridge system that Captain Johnson would like to see made in the interest of safety.

"We still have a function where you can silence the alarm," he said. "That needs to be changed. The captain needs to know as soon as possible whenever there is a problem with the system or the ship's situation."

He also firmly believes in human oversight of the electronic system.

One of Captain Johnson's concerns is the tendency of young watch officers – used to video consoles and games – to keep their attention focused totally on the electronic display while navigating.

"We've noticed a lot of the younger officers tend to focus more on the electronics – it's important that they develop the habit of looking up and out the windows to make sure what of what you are seeing, or not seeing on that screen."

Electronics is not the only area where the Jean Anne has managed to maintain its technical edge at the same time it strives to maintain a safe operating record.

The Jean Anne underwent retrofitting in response to environmental regulations in California. The ship is burning marine diesel oil, a lighter and cleaner fuel, and has modified its fuels to avoid the loss of power problem that has plagued other ships when they switch fuels when approaching port.

"We tried low sulfur, regular and gas oil fuels," said Ulrich Piencka, the Jean Anne's chief engineer. "We found we did not have the control we wanted, so we switched to using purely two grades – NGO and HFO. Outside the 200 miles limit, we use HFO, then we switch. The chiller improves the viscosity of the NGO, which improves the starting. We haven't had any loss of power problems that way."