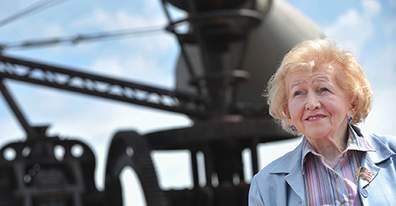 Helen Delich Bentley was a fierce supporter of the U.S. maritime community and a dear friend of the Pasha family and of The Pasha Group companies. “Throughout her life, Helen was a force to be reckoned with,” said George Pasha, IV. “She was a fearless champion for the maritime industry and a loyal friend to all who knew her. We are deeply saddened by the loss of this unforgettable woman and grateful for her unwavering dedication and contributions throughout her remarkable life.”

Article courtesy of AJOT.
Helen Delich Bentley, the feisty, highly respected maritime journalist, former Federal Maritime Commission chairman and five-term U. S. Congressman, died Saturday at home following a bout with brain cancer. She was 92 and worked, juggling two cell phones from her sick bed, almost until the day she passed away at her home in Lutherville, Maryland. Throughout her 70-plus year career, Mrs. Bentley had tirelessly promoted two major issues - the advancement of America’s industrial/manufacturing base and the maritime community that carried products to and from market-primarily through the Port of Baltimore.

Born in Ruth, Nevada, one of seven children, her father was a Serbian immigrant copper miner. While at high school, she worked on the weekly newspaper of Ely, Nevada, which was published by Republican state legislator Charles Russell. Helen received scholarships to study journalism at the University of Missouri, graduating in 1944.

Following her graduation, Miss Delich worked for small-town newspapers in Fort Wayne, Indiana and Lewiston, Idaho, but she wanted to report hard news for a larger publication; at the time, most women journalists were limited to writing social news. She contacted all the main East Coast newspapers and in 1945, The Baltimore Sun offered her a reporting position at five dollars a week more than the next contender and she never looked back. Initially reporting on labor and union matters, She was then dispatched to the waterfront to revive coverage of the port, a beat the newspaper had neglected during World War II. She had never seen a ship, or the ocean. It was a tough, male-dominated environment, but she loved it.

“I had to be as mean and as tough as I could be. And I was,” she said in 2010. “I was thrown out of more union halls. I was kicked out and carried out of the halls.” But it wasn’t long before the union bosses became her friends and sources.

“I wore ‘em down because I was always fair and I was always honest with them,” she said. She found other ways to fit in. Once, a longshoreman made a disparaging comment about her nose. She slugged him. Helen developed a maritime and waterfront news niche. She became a widely respected maritime reporter, dealing with people from longshoremen to politicians.

She was also a skilled mediator between labor and management, and an energetic advocate for jobs and economic opportunity. An internationally recognized expert on maritime issues, Bentley pushed for fair trade and a strong national defense.

Bentley also laid the groundwork for the establishment of the Maritime Security Program to provide adequate funding for American Flagged Cargo Ships. Today, this program has salvaged a major remnant of America’s merchant marine.

In 1969, then President Richard Nixon appointed Mrs. Bentley, who had married William (Bill Bentley) ten years earlier, as Chairman of the U. S. Regulatory agency Federal Maritime Commission. She became the fourth-highest ranking woman in the history of America’s federal government, the highest ranking woman of Nixon’s administration, the first woman to serve in a key governmental position in the maritime field and the first woman appointed by a President to head a regulatory agency.

She was a principal architect of the Nixon Administration’s 1970 Merchant Marine Act, which established a level of government support for building tankers and bulk carriers in U.S. shipyards.

Bentley used her chairmanship as a platform to strengthen American industry, and then continued the fight in Congress, where she became a leader against the transfer of jobs overseas.

Shortly before she was sworn to office, Helen answered a call—she said it was a journalism first—and she was invited to be part of it was Barbara Spector (Yeninas), already a dear friend mentored by Bentley and maritime editor of The Newark Evening News. They were to share a cabin on the ship operated by the oil conglomerate Exxon to conduct a financial feasibility study to determine whether it would be profitable to transport crude oil from Alaska to the mainland U.S. West Coast by shipping it through the Northwest Passage via tanker, an historic route that had never been traversed commercially for such a purpose and make the historic voyage as the first two women to make this trip.

Ticket in hand to board the ship in Halfax (to comply with the Jones Act) and with suitcases filled with cold-weather gear, Barbara received a call from the lead PR person. It seemed that Mrs. Bentley did not want to be one of the two women to make the historic trip; she wanted to be the only woman.

“I understood, I respected her immensely, she earned the honor so I bowed out, returned my ticket, returned the gear and took to reading about the voyage,” says Spector-Yeninas today. Recalls Allan Forman, also part of the maritime desk at the time at The Sun. “So the bow of the S.S. Manhattan was outfitted at Port Newark with icebreaking equipment and an historic test run was made. A press contingent of reporters from around the world was billeted on-board the ship, with Helen Bentley being the only female reporter on the trip.

President Nixon had just appointed Bentley to the highest post of any woman in his administration, but she delayed being sworn in until after the voyage of the Manhattan, during which she filed numerous Page 1 scoops for the Baltimore Sun relative to the history-making event.

“On the trip the FCC cut her off the air as she was dictating a syndicated column to reporter AL Forman (who was on rewrite that night and who frequently edited her columns) using a ship-to-shore connection that was being relayed through a ham-radio operator in Iowa, with the transmission being frequently garbled.

“At a crucial point in the story Forman was unable to understand the name of an obscure official being quoted and had to ask her several times to repeat and spell the name in question. As the phone connection was one-way only - each speaker was required to say ‘Over’ at the end of each transmission and then wait for the other to respond - her voice became more and more agitated, culminating in an eruption of ‘expletives deleted’ followed by silence as the FCC terminated the transmission.

“The Sun’s Night Editor thought the incident unimportant enough to deny Forman’s request to follow up to determine what had happened. But the next morning the Washington Daily News (a long- defunct tabloid in the style of the New York Daily News and N.Y. Post) ran Bentley’s picture on its cover, with the headline, ‘Tugboat Bentley Sinks the Manhattan!’”

“The story made headlines round the world, leading Nixon a week later to refuse to swear Bentley in as Chairman of the Federal Maritime Commission, despite having announced her appointment a month earlier with a major ceremony in the Oval Office. Vice President Spiro Agnew swore her in in an unheralded ceremony at FMC headquarters in a small office building then located on 14th Street.

“And the shipment of crude oil by tanker through Baffin Bay and the Northwest Passage proved financially unfeasible, leading to the pipeline that is currently in use,” reports Forman today.

Chairman Bentley stayed in the FMC position for a year after Nixon’s resignation and a bit into the presidency of Gerald Ford, returning to Baltimore to determine her next life role. It didn’t take long. In 1984, Bentley was elected to serve the first of five terms, representing Maryland’s 2nd Congressional District. While in Congress, she sat on the Appropriations, Budget, Public Works & Transportation and Merchant Marine & Fisheries Committees, in addition to the Steel, Art, Northeast, Human Rights and Trade & Tourism Caucuses.

She developed a reputation as a skilled mediator between labor and management, and an energetic advocate for jobs and economic opportunity. An internationally recognized expert on maritime issues, Bentley pushed for fair trade and a strong national defense.

Bentley also laid the groundwork for the establishment of the Maritime Security Program to provide adequate funding for American-flagged Cargo Ships. Today, this program has salvaged a major remnant of America’s merchant marine.

When she left Congress, she formed Helen Bentley & Associates, a maritime consultancy in Baltimore, that represented a broad-section of companies and clients needing maritime advice, contacts involving shipping, employment, sage advice, honest guidance and reliable information. In 2004, she was honored when the then Governor renamed the port The Helen Delich Bentley Port of Baltimore.

During the week she died she still had multiple telephones perched on her bed speaking to her clients and making her usual contacts. Four weeks earlier and already under hospice care, she asked Yeninas to circulate a press release she had written to advise that rumors of her imminent passing were premature and that she “wasn’t done yet.”

When asked by a very recent visitor what she will miss most, she responded: “Oh the people from everywhere, my dogs and getting my hair done regularly.” She asked: “How do I look?” Well, said the visitor: “Fabulous, feisty and frail.” Without hesitating she responded: “I love being described with three F-words.”

Paul F. Richardson, a colleague for some 60 years and former Sea-Land Service president, said: “There never was and never will be another like her. She knew our industry and covered it with integrity and even humor.”

At her bedside when she passed were close relatives and friends, such as Sue Everson, a niece who survives, and cousin Molly Regan. She is being privately interred alongside her Bill, who died in 2003. They met on a blind date, married in 1959 and were incredibly devoted to each other. Bill was a high school teacher who ran an antique shop. Together they opened the Bill and Helen Bentley Antique Roadhouse in Cockeysville, MD, a treasure trove of true antique furniture, china, crystal, jewelry and apparel. Much of this bounty will benefit various already-designated charities in the Baltimore area.

A memorial will be held in Baltimore in October. Among the crowd is anticipated to be politicians from the highest level, industry colleagues and many of the middle-class and blue-collar workers-all of who cherished her over the years and knew she was a trusted friend to all she met.