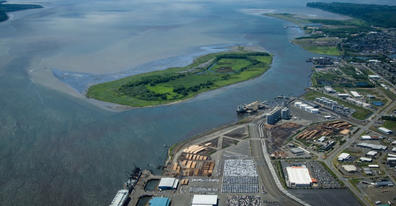 The deepening of the Grays Harbor Federal Navigation Channel will begin in 2015 as funds for construction were made available in the Corps FY2015 work plan. Federal funds for completion of the project were also included in the President’s FY2016 budget.

Aberdeen, Wash. - Construction for the deepening of the Grays Harbor Navigation Channel to its fully authorized depth of -38 feet MLLW will get underway in 2015 as $8 million for this critical project was included in the U.S. Army Corps of Engineers (USACE) Fiscal Year 2015 (FY2015) work plan that was released Tuesday. President Barack Obama’s FY2016 budget also included $7 million for completing the deepening.

One of the fastest growing export ports on the West Coast, Grays Harbor has experienced a surge in cargo volumes at its five deep-water marine terminals, with vessel traffic increasing more than 300% over the past five years. The proximity of the Port to the Pacific Ocean and the expanding export markets on the Pacific Rim have been instrumental to cargo growth. With 90% of Grays Harbor’s shipping activity being export, the Port of Grays Harbor is a positive contributor to the US balance of trade. The deepening of the federal navigation channel to its congressionally authorized depth will ensure that U.S. grown and manufactured products are competitive in the growing Pacific Rim trade.

“We are beyond thrilled the Corps was able to make our project a priority for the FY2015 work plan. We appreciate their hard work, as well as the support of our State and Federal elected officials in making this important project possible. Deeper Draft will serve our customers, our community and our country well into the future as we continue to provide a crucial link between United States growers and producers and international markets,” stated Executive Director, Gary Nelson.

The Grays Harbor Navigation Channel was authorized by Congress to a depth of -38 feet MLLW in 1977. Construction of Phase I was completed in 1991 improving the channel to a depth of -36 feet MLLW. Efforts for Phase II, constructing the channel to its fully authorized depth of -38 feet, began in 2007 and have included feasibility reports, biological assessments, impact mitigation studies, environmental assessments and Supplemental Environmental Impact Statement completed in June 2014. In August 2014, USACE Brigadier General John Kem of the Northwestern Division signed the Record of Decision (ROD), officially recommending deepening the channel to -38 feet MLLW and that it was technically feasible, environmentally justified, cost effective and in accordance with environmental statutes and public interest.

The Port of Grays Harbor, as the local sponsor, is working with the State of Washington to secure the cost-share of $4.575 million for the project. The State previously provided the cost-share for both Phase I of Deeper Draft, as well as the deepening of the Columbia River in 2005. The deepening of the inner harbor is expected to begin Fall 2015. Founded in 1911, the Port of Grays Harbor is one of Washington State’s oldest port districts and Washington’s only deep-water port located directly on the Pacific Ocean.

The Port of Grays Harbor operates 4 deep-water marine terminals, the Westport Marina, Bowerman Airport and numerous industrial and business parks throughout the region. The addition of Satsop Business Park increases the Port’s properties to more than 1,000 acres of industrial properties and an additional 1,200 acres of sustainably managed forestland. Strategically located midway between Seattle and Portland and less than 1 ½ hour from open sea, the Port of Grays Harbor provides businesses a diverse portfolio of facilities.

More information on the Port of Grays Harbor’s facilities and operations is available at portofgraysharbor.com.